We are pleased to announce that we will be leading another first time entrepreneur seminar for the Los Angeles Venture Association (LAVA). The seminar will be on Saturday, May 8th from 10 a.m. to 3 p.m. via Zoom.

During our five hour program, you will learn how to:

Intellectual property is often the most valuable asset that a startup has when it is formed. Effectively protecting a startup’s business ideas is critical. When drafted properly, a non-disclosure agreement, or “NDA,” can protect a company’s client lists, pricing information, and other key business intelligence.

At minimum, an NDA will have:

To harness the benefits of an NDA, it is important for startups to invest some extra time and care in examining the contractual terms. A founder logically wants to balance the obvious need to get customers or land big vendors with the long-term goal of protecting the company’s intellectual property.

Before signing an NDA, startups should carefully read the NDA to make sure the founders understand what will be protected. NDAs sometimes include tricky provisions covering employee poaching and residual knowledge, so not every NDA is “boilerplate.”

Structurally, NDAs can be one-way or mutual. A one-way NDA allows the disclosing company to unilaterally keep the other party from sharing confidential information. A mutual NDA would keep both parties from sharing confidential information with unauthorized parties. While the choice of structure should be evaluated to suit business needs, many companies will find that it is far easier to propose a mutual NDA, since this structure provides more comfort to the party getting the mutual NDA that they will be treated fairly.

While NDAs can be essential in protecting a startup, they should not be overused. As a general rule of thumb, NDAs should be considered whenever the company is in negotiation with a client, vendor, or individual investor that has the opportunity to “borrow” or leverage the company’s information. With vendors such as lawyers, accountants, and bankers, NDAs are usually not necessary since there is usually little risk that they will be interested in taking the company’s business ideas. Additionally, it is worthy to note that venture capitalists generally never sign NDAs. This is because NDAs interfere with a venture capitalist’s ability to invest in similar businesses in the same industry, a freedom that they are unlikely to give up.

Regardless of industry, NDAs can be useful tools to protect a company’s essential business information. The power of the NDA, however, largely depends on thorough drafting and thoughtful planning.

Small businesses and charities need our support now more than ever.

Here are a few simple things that I’m doing.  I’m sharing as a way to inspire others — not looking for any “attaboys”.

I’m hopelessly addicted to the Thai food at Spicy Lime, a restaurant near my office in Encino.   It’s run by a small family.  I eat there so frequently, the owner baked a small cake for me a month ago.

I bought a $500 gift certificate for use when the crisis is over.  That’s an easy one.

Over the years, I have done a cooking club for homeless women at the Downtown Women’s Center for several years.  I can’t ask my friends to go there to cook.  However, rather than just write a check, I’m doing a “two’fer”.  I’m going to order another $500 in food from the restaurant and donate it to the DWC.  The restaurant wins and the DWC wins.  It’s a great way to stretch my dollars.

Given that our economy is about to go through the ringer, the needs out there are going to be enormous.  If we all do what we can to support local businesses and charities, we can get through this together.

I’m excited to be speaking on Saturday, February 1, 2020 at a lunch seminar at UCLA hosted my friends at Biotech Connection Los Angeles from noon to 2:30 p.m.  The seminar will cover mistakes that bootstrapping founders sometimes make.  I will be explaining how to set up a new venture the right way, issue equity in a way that protects co-founders, and generally making new ventures investible.  The details of the seminar can be found here:  https://lnkd.in/ejGikSb.

BCLA is one of my favorite organizations.  BCLA is run by academics and biotech professionals from all over Los Angeles.  They focus on inspiring, educating and connecting emerging scientists and entrepreneurs to grow and diversify biotech in LA.  To learn more about BCLA, check them out at:  bc-la.org.

Hope to see you there!

Yahoo Finance just posted the following article about a significant change to the 1040 income tax form, asking about a taxpayer’s financial interests in cryptocurrency.  https://finance.yahoo.com/news/irs-adds-specific-crypto-question-to-2019-tax-form-192521373.html.

Thanks again to all of our great attendees who gave up a Saturday to learn about valuation, cap tables and other important venture topics at our first time entrepreneur program.  We are grateful to David Mandel from Pasadena Angels for sharing his time and advice.  Also a special thanks to LAVA and Len Lanzi for being so supportive of the program.

I am extremely pleased to announce that I will be speaking at the upcoming LAVA (Los Angeles Venture Association) ‘First Time Entrepreneur’ training program. The program is open to entrepreneurs that are starting companies in areas that are likely to draw venture capital investment. Those in attendance will learn how to:

Determine the value of their company
Put together a capitalization table
Understand how VCs screen potential investments
Understand the differences between trademarks, copyrights and patents and when you need them
Choose co-founders
Network at startup events — the right way

The program will take place on October 26th from 10:00am to 3:00pm, you can purchase your tickets here:  https://www.lava.org/events/first-time-entrepreneur-workshop-102619.

I had a great time speaking at Cal State Dominguez Hills (CSUDH) on Tuesday at a fantastic capital forum run by Gary Polk. Over 120 participants enjoyed a full day of programming.  I also had the chance to watch a great presentation by Jennifer Brodmann, an assistant professor in CSUDH’s finance department.  If you haven’t checked out the campus, it’s worth it; it’s beautiful. Here are some photos from the event. 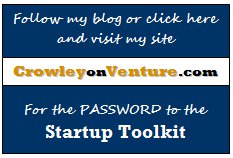